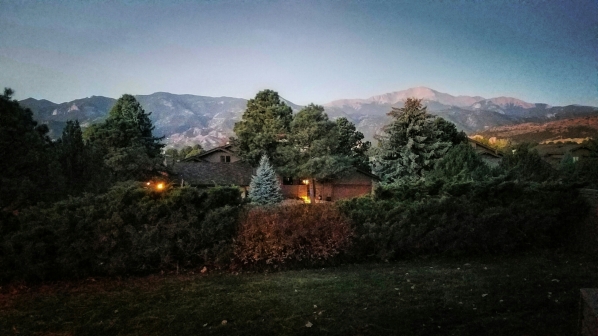 My alarm is set for 5, but for some reason, on this Saturday, childless morning, in the mountains of Colorado,

I walked outside on the balcony and remembered what it was like to see the stars.

The beauty here is so rapturing, it has the power to remove the filters overlayed by years of experiences and allow the blank canvass, pure you, see.

Staring into that dark expanse, I thought of how this same sky has always been there. This beauty and majesty, born of chaos and massive chemical reactions, has remained mostly unchanged (from our small temporal view), and this Rock has spun, day after day.

From the days ancient people gazed at these same stars and constellations, believing they were cracks or holes in a solid firmament, mankind found fire, the wheel, agriculture. Built civilizations, industry, and governments. Goverments founded on war and dominance: from theocracies, monarchies, and dictatorships. Then those founded on freedom and liberty, with hopes for peace.

These times of peace lead to discovery and advancement: We charted the world, explored the depths of the sea, and traveled through the idea of and physical reality of the firmament those ancient people thought they saw, and peered back at this ‘pale blue dot.’
Though this sky has stayed the same, it has seen us change.

We have grown. We have progressed.

Believe it or not, we are less Eye for an Eye and more Turn the Other Cheek. It does not always feel so, particularly in how we express our collective voices this political season, but it is true.

Every civilization, every age has fought this tension and bore these burdens so those after them could have more…

We honor them, but forget their pain, that their struggles were bigger than themselves, and that those struggles don’t end.

At times, it feels as though there are setbacks or disruptions, but this too is part of the process.

We forget we are of one kind for a preferred belief in our ‘groups.’ And here at home, our groups arent getting along.

But WE can. WE will. The faster we understand that, the faster it can become true.

We will continue to progress because that is what we have always done.

Just as this Rock will continue to turn, as it has, and as the first people stared incredulously at this same expanse I was captured by this morning, we will keep moving forward. Day by day.

Through the triumphs and the tears.

There is as much hope and solace there as in this mountain air and starry sky.

At least that’s how I feel.

I love you, even though I dont know you.

What you may have missed